For many people home is where the heart is. Since I have been in Budapest, there has been one such place that illustrates this much better than I can explain. Jack Doyle’s Irish pub. Located in the heart of the city at Pilvax köz there is no better spot in Budapest to feel like you’re at home. Whether it’s match day and you’re looking to catch the rugby, or just meeting a few friends for the ‘craic agus ceoil’ (fun and music!) the feeling of having a home away from home is quite alive here in Budapest, whether you’re Irish or not! We caught up with Charles Griffin, owner of Jack Doyles in Budapest to find out why he thinks Budapest is a hot spot for tourists and what it’s like for him as an Irish man to work and live in Budapest. 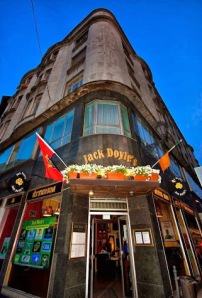 What do you feel attracts people to Hungary and to Budapest? Irish tourists in particular…

Well I think with the economy having changed the way it’s changed at home, you know the joke was years ago that people who were going to Paris for weekends and people were going to New York for a shopping trip and stuff like that and obviously the money wasn’t there as much so therefore as a result they had to look at what they could do instead and look at what they would consider ‘exotic’ locations that they would have never have looked at before, the likes of Hungary, the likes of going to Romania, you know Bulgaria and places like that. So I think that’s what attracted people initially no more than myself when I came out here in 2007 I had never done any research on Budapest you know I had known nothing about it except for my friend living out here. 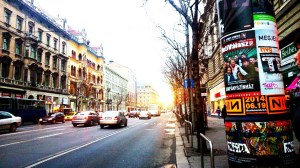 And actually still even now when you get the taxi in from the airport or even the train, you’re still not sure what you’re coming into until you hit the city centre you know. Obviously people have discovered what a beautiful city this is, I mean it’s very appealing as regards to history here; the architecture, and the influence of so many cultures that were here before. And I suppose Ryanair made a huge contribution when they started flying in here two years ago when Malev the national carrier went bust and Ryanair immediately took over their routes and launched something like 35 routes in and out of Budapest within a month. So they’ve obviously contributed to the tourism factor here and I think as well obviously it has spread big time through word of mouth with students over here and things like that.

Here’s a shot of St.Stephen’s Basilica framed by the beautiful architecture that the streets of Budapest have to offer.

I think last year it got No.1 city break in Europe and No.7 in the CNN World pole. I mean it stands on itself, yes the fact that it’s a little bit cheaper helps, but I mean it’s got the city, it’s got the weather, it’s got the architecture, and it’s got the people. It’s a good city to visit all round.

How would you describe your clientele here as an Irish bar in Budapest?

Now we’re in our fifth year in business and at the moment we probably run on somewhere like 60/70% of our clientele is now tourists that are here every weekend, expats living in Budapest, and then maybe about 15% of it actually Hungarian clientele and then the other 15% is probably the students that are here permanently. So, the dynamics of our clientele has changed but the tourist side of it has increased very much so.

And finally, are you here to stay? Is Budapest home now?

Yeah that’s a very difficult question; I suppose when I came out initially I didn’t have any thoughts in that way. The last time I got into a project like this was a five year plan, and when the five years was up I, wanted to, and got out very quickly of that. I suppose initially this wasn’t a five year plan because I have a long-term lease here but it was a ‘five year’ to see how it would go. Now we’re open five years and I’m very happy touch wood that we are and that it is a success. But it’s a continued success I can see that it still has a lot to be built on, especially the last two years has proven to us that we have something that’s very good and something that we can build on and I would be confident that Jack Doyle’s is something that yes could survive in Budapest for ten, fifteen, twenty years, where as in the first few years you just don’t know. 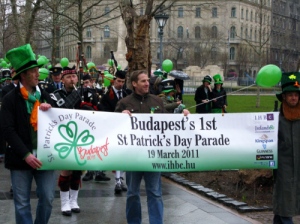 So I suppose recently the conversations have come up; there’s nothing tying me here at the moment as such other than Jack Doyle’s, having said that there’s nothing dragging me away either. I’ll wait and see but I have thought about it, if I do make a decision it’ll have to be this year and it’ll obviously have to be a commitment of what I normally go with which is five years. But we’ll wait and see. If I was to move it wouldn’t be to home just yet anyway, it would have to be something somewhere else because there are plenty of places to go. We’ll wait and see…

The lovely colours of Budapest in the Spring time. Not the worst place to be 🙂