I come from a city called Nyíregyháza, it is in Szabolcs county. I live in a very calm and quiet part with fresh air, lots of trees and children playing on the streets. It is the perfect suburban dream.  When I first moved to Budapest it was extremely hard for me to adjust. I simply couldn’t stand the noise, the smell and the people. They were always in a hurry, always rude and mean. For example, when I asked for help with directions no one had the time to stop and actually tell me where I should go. People were pushing each other and me on the bus, yelling at me when I had problems in the post office, or at the supermarket. It felt like I could never fit in. 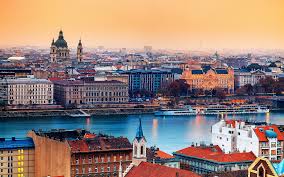 As my weeks passed I realized that my initial fears were going to be true: I will NEVER  fit in with these people. So I took a turn on it and stopped feeling guilty for not fitting in. I started wanting to stand out. From then on I was the brightest ray of sunshine you could ever imagine. I gave my seat on the bus to older ladies, helped with heavy packages, chatted about the weather with my neighbours, bought flowers to the old lady living above me who was having a birthday that day. I became the “sweet girl” from my building and on the bus on my routine way to school. And the world around me – even if it wasn’t that big – started to change. The bus driver waited for me instead of leaving me at the bus stop, my neighbour stopped smoking when she knew I was doing my laundry on the balcony, and the old lady and I made friends.

I never quite believed the quote of Gandhi: Be the change you want to see in the world. But my first two months showed me that it’s true. I was nice, so everyone was nice to me.It was a huge change and it really helped me to start a new life here. After these few weeks I didn’t hate people, I got used to them. And they got used to the brown haired girl on the bus who was always smiling.