Hiking inside the city? Well, it isn’t impossible in Budapest (honestly, nothing is impossible in this madness)! Actually, it isn’t surprising if you think about geography. Budapest is divided by the Danube into two parts. Pest is the flat part, and Buda is… the hilly one!!!

That was pretty good news for us since we love hiking. Being surrounded by nature, far from the noises of the city. For us, this is the real recreation, when we can recharge our own dead battery. Do you feel the same? Read our guide to get ready for the new – inside the city – adventure!

Our first advice: be prepared!

We had to learn the hard way that hiking – even if you don’t need to leave the borders of the city – isn’t an easy walk in a park. Here is the list, how you can be prepared!

No flip-flops, no converse, and of course no high heels (they are not for high- hills, haha). In Budapest, you don’t need the most expensive hiking boots, but at least cheap hiking shoes are recommended. I used my running shoes and I failed. Literally. In the mud.

Check the weather forecast before you leave! And if it says there is a chance for rain, don’t trust in your luck! It will rain! Especially if you leave home without your raincoat. So if you don’t want to be the part of the “sweating + cold rain = being sick for two weeks” equation, then bring that raincoat!

Taking care of hydration is recommended. And some food can be useful too. Especially if you get lost – as we did – and have no idea when you will find your way back to civilization and be able to buy gyros.

Study carefully the itinerary! You can be lost easily in the Buda hills, but don’t worry! Even if you find yourself on a different route, you will be able to get out of the forest. Don’t forget, you are still close to the city! Bear Grills skills are not required here.

There are plenty of hiking groups in Budapest. Unfortunately, the websites are mostly in Hungarian, but they are not too hard to understand (thanks for the icons, not the language).

Here https://tturak.hu/ for example, they organize hikings all around Hungary. There is a small fee you have to pay when you show up, but in exchange for the money, you will stay on the right route for sure! They even go for night hiking, which sounds like great fun. Sadly even if we planned to join them, something ( sickness, travel, or just bad weather) always intervened.

An other option for finding hiker partners is the Facebook group: https://www.facebook.com/groups/budapesthikers/

Now you have all the important information about hiking in Budapest. So put your boots on and let’s go on an adventure!

We met at Széll Kálmán tér early morning. This was our first hike together. We were excited and enthusiastic despite the gray, rainy weather. We were kind of unstoppable, let’s say.

Our real aim was to hike the Apáthy cliff – Kecske hill – Árpád viewpoint circle. Our decision was made after a long research and discussion. We were looking for a route close to the center, but still out of the touristic zone. Something long enough to get tired, but still bearable for our -out of shape- condition. And well, Apáthy cliff seems to be the winner. 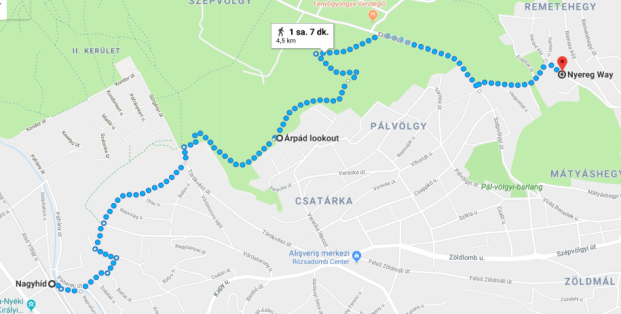 Stop one: Széll Kálmán tér: We met at one of the most typical Budapestian meeting points ever. Which is the clock at Moszkva, sorry, I mean Széll Kálmán square. From here you can take the tram 56 or 61, as we did, to reach the starting point of the hike.

Stop two: Nagyhíd tram station: The starting point, Nagyhíd station is surprisingly still in the located area. After arrival, for around five minutes long, we were just confused, running up and down, trying to find the direction of north and the painted green arrow. This was the sign of our route in the beginning. That’s what we followed blindly, up the Battai stairs, then through muddy paths and dark forest. 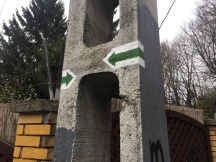 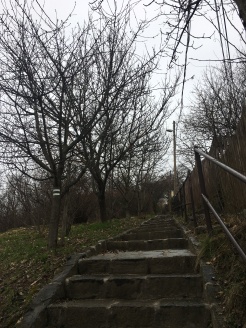 Stop three: Apáthy cliff: That’s how we arrived at our first goal, the Apáthy cliff. From there we had a nice view of the opposite hills. Even tho the weather tried it’s best to hide everything in big gray rain clouds. 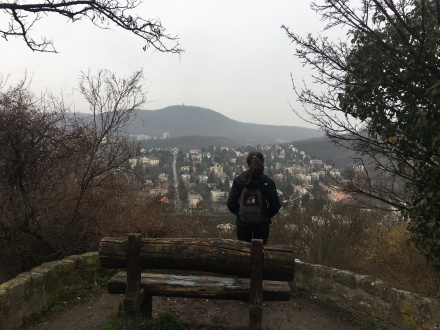 Stop four: Unknown: So we followed the path after the cliff. For a while, a fence protected us from falling down, and at the same time, the flowers from our footsteps as well. We were just walking, sliding, falling and walking again until we found ourself crossing an asphalt road. Here we supposed to follow the red sign, but it won the hide and seek game. Eventually, we just picked a random route and continued to hike. We didn’t know where we are, but suddenly we realized, we arrived at our ultimate goal.

Stop five: Árpád viewpoint: We have no idea if we did teleport without recognizing, touched a port key or crossed a wormhole, but we were there. Without crossing the Kecske hill and seeing the Lion rock, we arrived at the Árpád viewpoint. Actually, I am not hundred percent sure about the Lion rock, maybe we just didn’t recognize, since you need quite a lot of imagination to say: “Hey! That piece of stone looks like a lion!”. So we agreed to don’t care and just enjoyed the view! 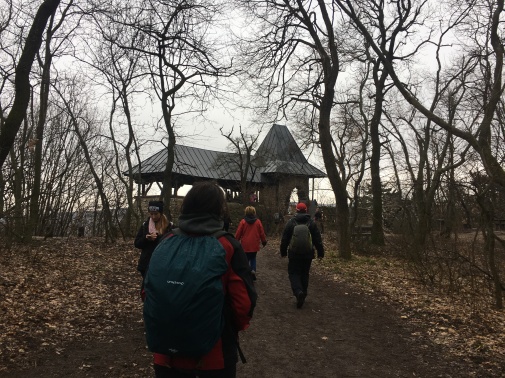 Last stop: fun: Eventually we totally gave up to follow the original itinerary. We just followed our heart, continued to walk in a random direction. That’s how we found our favourite part of the route. We could hear the birds singing and filled our lungs with fresh air, before going back to the civilization. We even saw a cyclist and agreed in not to copy him ever. The path was narrow and slippery enough to provide us adrenalin even while walking. 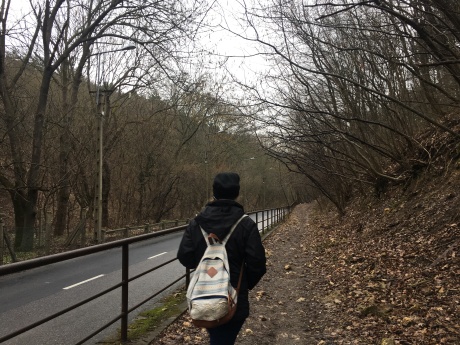 If you are looking for a calm place to hike, still close to the center, we encourage you to try this one! And if you made it, please let us know, where did we go wrong! Cheers!

Here comes the story of our second adventure!We mentioned about the hills on the Buda side. That’s the place where János hegy is hiding as well. The reason it caught our attention is the fact, that János hegy is the highest peak between the Buda hills. That’s why we aimed to climb the hill, including the Erzsébet Lookout Tower on the top of it. We wanted to touch the sky and enjoy the view from there. The tower seemed super far away from our starting point, but we made it. Are you asking us, how? Keep reading! 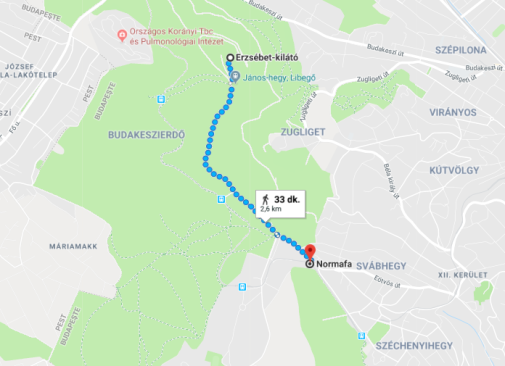 Stop one: Széll Kálmán tér: We met at Széll Kálmán tér. Yes, again. From here, the bus number 21 and 21A goes to Normafa which is the last station. We started our hike there.

Stop two: Normafa: First it didn’t seem complicated to find the right way (not like as it was at the Apáthy cliff). There were signs everywhere, we just had to follow the one for “Erzsebet Kilato”. After walking for a while, we saw different signs and colors on the trees. So we just got confused again. Eventually, we needed a big amount of intuition and luck to find our way.

Stop three: Libegő, felsö állomás: When we came out from the forest and saw the last station of the chair-lift, we knew we made it. Well, almost. The tower still looked so far. The good news is, that it’s not true. It is actually quite close to the station. But the bad news is that you have to climb again. We had two choices to make it: a really sloping road which is tiring, or the stairs, which are even worse.

Stop four: Erzyébet Lookout Tower: Finally! Here we are! If you get there once, order a cold drink just like we did. You deserve it! Not to mention that you will need to rest and spare some energy for the way back anyway.

Okay, maybe it is a bit too mainstream, but still a good hiking spot! The Citadella is one of the most touristic spots in Budapest. But with a very good reason! The view from the top is breathtaking, and of course, the way up there too. So if you are looking for some hiking in the heart of the city, Gellért Hill is a perfect choice.

Stop one: Liberty Bridge: Our suggestion is to start the hike from Fővámtér. From there, you need to cross the Liberty bridge. After seeing the river view from the bridge, seeing from above will be even more meaningful. That’s why we decided to cross the river from Pest to Buda by walking on Liberty Bridge. At the Gellért Hotel, we found our first green sign and started to climb up the hill. 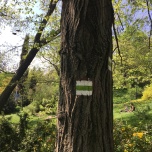 Stop two: Gellert Hill Cave Church: We reached our favorite photo shooting spot in five minutes. It was in front of the Gellert Hill Cave Church. We did not enter the church but we took some really nice photos with the Liberty Bridge. Do not forget to take a good look at your surrounding! The view is beautiful but different from every viewpoint. You are rising slowly! 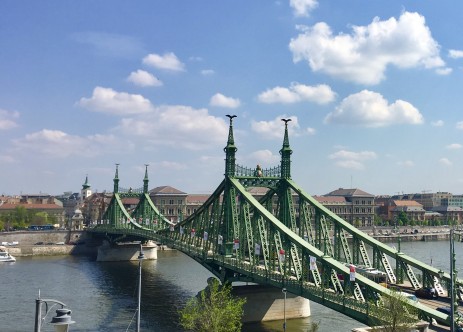 Stop three: Benches: We continued climbing by following the signs on the trees and stones. We took a few breaks, for example at the benches. It would have been too tiring to go upstairs without stopping in the warm weather. And anyway, we just wanted to enjoy some sight of the amazing Budapest.

Stop four: Citadella: When we reached the Citadella – which is a symbol of freedom -, whole Budapest was under our feet. We could look down to the whole city. The Danube, the Parliament, the Buda Castle… were stunning. It was amazing to see the whole city like that and it was worth all the steps! Extra tip: If you go there before sunset and wait till it gets dark, you can see the view both at daylight and with the city lights on as well! 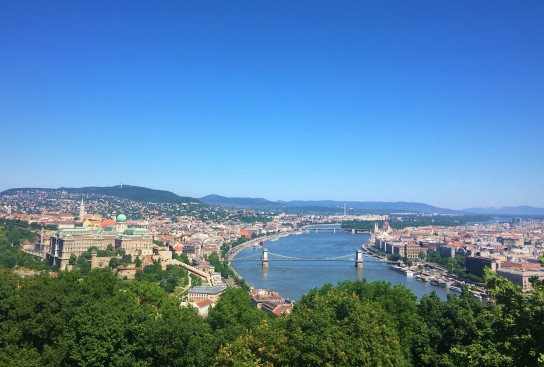 Again the summary: one and a half hours, 1.9 km distance, 2 tired girls +gorgeous view, historical statues, feels like home!